US President, Donald Trump, has reacted to a Federal Appeals court judgement ordering the charges against his former aide Michael Flynn to be dropped.

Michael Flynn is a retired United States Army lieutenant general who was the 25th National Security Advisor for the first 22 days of the Trump administration until his forced resignation.

In a victory for the Trump administration, a federal appeals court ruled Wednesday, June 23,  that U.S. District Judge Emmet G. Sullivan must immediately dismiss the criminal case against Michael Flynn, saying he cannot scrutinize the Justice Department’s decision to drop the long-running prosecution.

The court's decision comes after the Justice Department in May ordered the charges against Flynn to be dropped as they were politically motivated.

Flynn twice pleaded guilty to lying to federal agents about his pre-inauguration contacts with Russia’s ambassador.

In a 2-1 decision, the court said it is not within the judge’s power to prolong a prosecution or examine the government’s motives in the politically charged case.

“This is not the unusual case where a more searching inquiry is justified,” wrote Judge Neomi Rao

The judge’s “demonstrated intent to scrutinize the reasoning and motives of the Department of Justice constitute irreparable harms that cannot be remedied on appeal,” Rao wrote in the 19-page opinion that was joined by Judge Karen LeCraft Henderson, a nominee of President George H.W. Bush.

"Is James Comey and his band of Dirty Cops going to apologize to General Michael Flynn (and many others) for what they have done to ruin his life? What about Robert Mueller and his Angry Democrat Cronies - Are they going to say, SO SORRY? And what about Obama & Biden?" 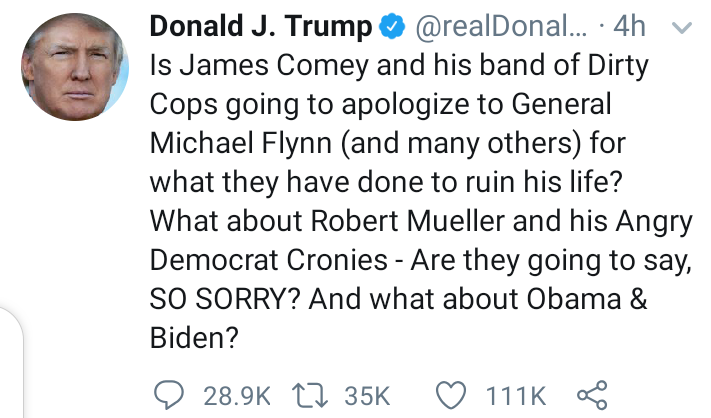